A project to improve STEM education at Moreno Valley College and beyond.

Every year, Moreno Valley College (MVC) experiences the migration of cliff swallows (Petrochelidon pyrrhonota), coming from Central or South America to breed. They build multiple nests around campus, utilizing the nearby lake as a water source, and the surrounding hills as a mud source for their nests. To better understand the abundance of swallows present on campus during the breeding season through a scientific lens, MVC created the Flying with Swallows (FWS) project. The FWS project aims to promote undergraduate research, scholarship, and creative activity using MVC's unique local fauna.

Funding for FWS comes from two grants from the Community College Undergraduate Research Initiative through a National Science Foundation (NSF) grant and an independent NSF grant. 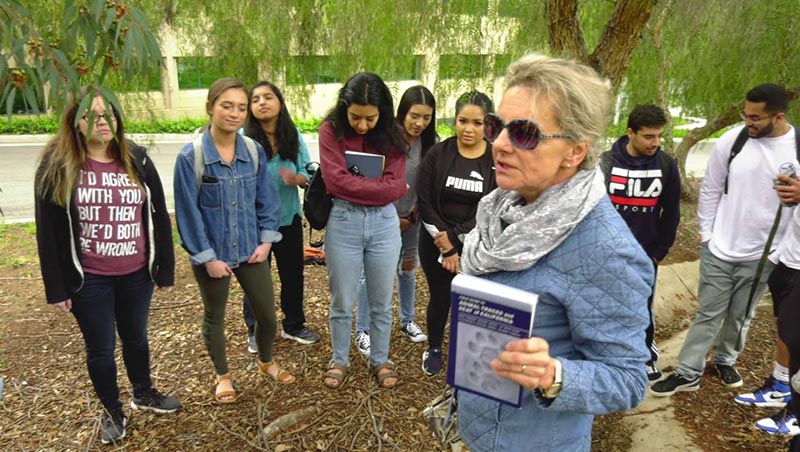 Learn about the Flying with Swallows Project

Cliff swallows are insectivores feeding on insects flying in swarms. All swallows are protected under the Migratory Bird Treaty Act of 1918 as migratory insectivorous birds, and as such, are protected by state and federal regulations. The California Department of Fish and Wildlife considers February 15 to September 1 to be the swallow nesting season. The abundance of cliff swallows at MVC during the breeding season suggests that they could be a keystone species in the fauna community at this time.

Approximately 200 to 250 biology and chemistry students have participated in the FWS project annually since 2015, under the projects' two primary lines of inquiry: Ecosystem Survey and Ecosystem Investigation.

Students have engaged in FWS-based research and published their findings both as MVC students and continued their efforts as MVC graduates.

FWS has two ongoing initiatives for the Ecosystem Survey aspect of the project: "Adopt a Window" and "Who Lives Here." Within the framework of these activities, students record swallow data using Geographic Information System software, ArcGIS, donated to MVC by Esri (Environmental Systems Research Institute) in Redlands, California. The software created by Esri is considered the most advanced GIS mapping software available.

"Adopt a Window" provides opportunities for individual research within the course.

Related activities involved biology students monitoring the swallow population on campus by observing nests and swallows' activities around them. Each student has been assigned to a specific window on the campus where the nests are present. Students document their observations and record those activities using ArcGIS. Biology students also collect samples (feathers, droppings, fallen nests) from their assigned for future analysis by BIO-11 and CHE-1B students.

Ecosystem Investigation activities for chemistry students includes development of methods to measure water and soil contents used by swallows to build their nests.

The Ecosystem Investigation of FWS involves biology students performing ongoing insect DNA barcoding to identify insects collected on the campus. DNA barcoding was expanded during the 2016-17 academic year by introducing the analyses of stomach content from swallows found dead on the campus, mainly young hatchings fallen from nests.

The FWS initiative has multiple collaborations to enhance research-based learning developed by the project, and to create the transfer culture at MVC. The links below represent people and institutions the FWS project has been collaborating with.

In order to assess and survey the effectiveness and outcomes of the Flying with Swallows Project, routine anonymous surveys, evaluations, and focus group testing was conducted by third party organizations.

Reach out to project lead, Dr. Joanna Werner-Fraczek, Professor of Biology, if you have any questions about the FWS project.

Ready to become a Mountain Lion?